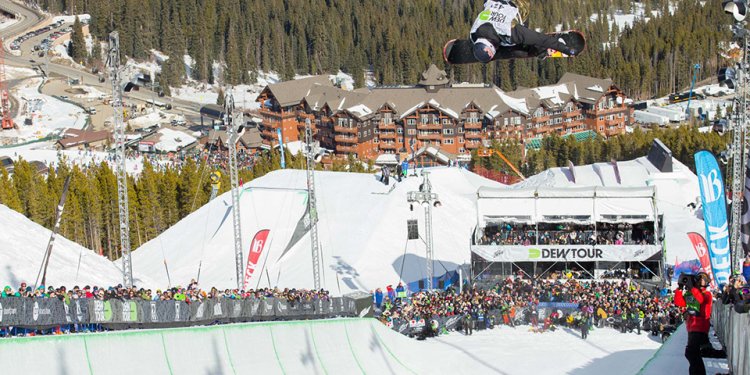 The final countdown is on for the ninth annual winter Dew Tour in Breckenridge, Colorado scheduled for Dec. 8 – 11, presented by Mountain Dew® and TEN: The Enthusiast Network. Weather patterns have brought snow, cold temperatures, and favorable weather to the forecast, allowing TEN and Breckenridge Ski Resort to provide a new two-part slopestyle competition, a new adaptive banked slalom competition, a new team challenge and the return of streetstyle. Winter conditions did not arrive in time for the construction of the modified superpipe competition, which has been removed from the event schedule.

“We are fortunate to have the combined expertise of TEN: The Enthusiast Network, Snow Park Technologies and Breckenridge Ski Resort in delivering a modified course and competition that will embrace the spirit and style of the reimagined Dew Tour, ” said Adam Cozens, VP and General Manager, Dew Tour. “We’re excited to kick off this preeminent winter season event with the modified jumps and jibs course, adaptive, streetstyle and our new team challenge, as well as a whole weekend of competition and fun including our Saturday
night concert, the Powder Awards and TransWorld SNOWboarding Riders’ Poll Awards, activations on-hill and in-town and more.”

What to Look Forward To:

The fully integrated Dew Tour Experience – the four-day winter celebration and intersection of music, art and action sports culture – will take place at the base of Peak 8 and in downtown Breckenridge.

Reimagined individual slopestyle competition that will include a Jump Section with one massive big air style jump where diversity will be rewarded as athletes are scored based on their best two out of four jumps and the Jibs Section, now featuring four separate jib setups, in which the best one out of three runs will be judged. Results from both sections will be combined for one total slopestyle score.

Adaptive competition makes its debut at Dew Tour with adaptive athletes slated to run on a banked slalom course on Springmeier trail and compete for fastest times.

Streetstyle, a fan favorite, will take place in the heart of Breckenridge on Dec. 9, coinciding with the other new town events –Powder Awards and TransWorld SNOWboarding Riders’ Poll Awards.

“We’re thrilled to see the Dew Tour come to life for the ninth consecutive year and to be able to reimagine the experience for athletes and fans, ” said John Buhler, vice president and chief operating officer of Breckenridge Ski Resort. “We’re extremely proud of the
partnerships we’ve established with TEN and Mountain Dew and the hard work put in by all to realize this remarkable event.”