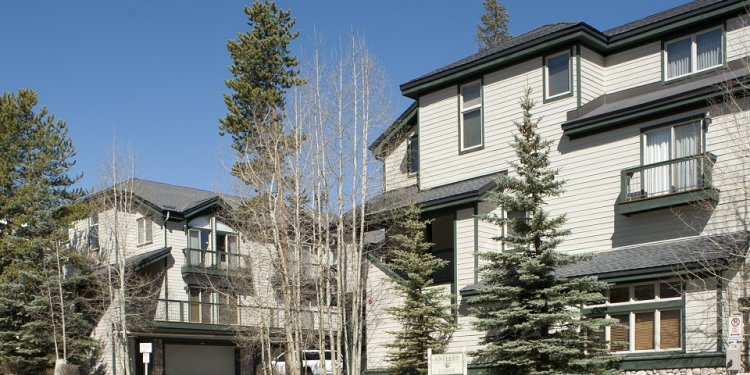 Nestled in the mountains of Colorado, Breckenridge is a year-round vacation destination. (Photo: Images )

The Victorian town of Breckenridge, Colorado, has been transformed into a bustling ski resort over the years, but the residents still take pride in its history. Tucked away in the Rocky Mountains, Breck is a year-round vacation destination. The town is especially popular in wintertime for its ski slopes and the many ski-in, ski-out accommodations at the bases of the four peaks that make up Breckenridge Ski Resort.

Flanking 4 O'Clock Ski Run, Pineridge Condominiums(pineridge.com) offers a total of 81 condos ranging from upscale luxury to slightly dated and homey, all with backdoor ski access. The units are privately owned and individually decorated, but all have at least one fireplace. The property has a fitness room, two outside hot tubs, free parking, advance lift ticket sales and an on-site ski rental shop.

Grand Timber Lodge (grandtimber.com) offers ski-in and ski-out convenience, and at the end of a cold day, guests can enjoy two heated swimming pools and six hot tubs. Choose a studio, one bedroom, a two-room suite with a kitchenette or a fully-equipped condo. All have access to amenities including a recreation room, arcade, gym and a playground. In the evening, guests are invited to gather around the fireplace in the Grand Room for a story session, Kids Fest and movie night.

The ski-in, ski-out Riverbend Lodge (resortquestbreckenridge.com) sits right next to the Snowflake ski lift, allowing guests to hit the bunny slope after that first cup of coffee. From there, catch one of the many lifts to slopes of varying difficulty. This collection of privately owned condos ranges from studios to three bedrooms, all with fireplaces. Shared amenities include a fitness room, a hot tub and a heated garage. There are no hotel services on-site, but the lodge provides free shuttle service to anywhere in Breckenridge.

The condos at Blue Sky Breckenridge (blueskybreckenridge.com) range from studios to four bedrooms with a den, and each has a bathroom for every bedroom - a plus when traveling with a group. The Snowflake lift and lift ticket office are both on the property, as is a full-service spa, a Precor fitness center, a game room for the kids, a heated poo and three hot tubs. There is no restaurant on the premises, but during the weekend you may order meals for delivery from Harvest Catering.