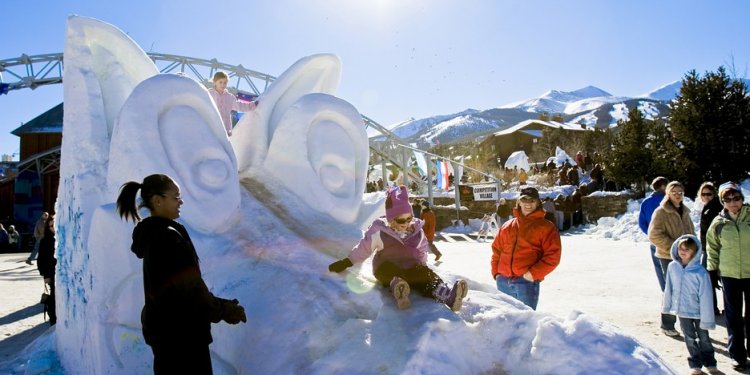 This week, teams from around the world have made their way into the little town of Breckenridge, Colorado, to breathe life into over 20 tons of snow for the 25th annual Budweiser International Snow Sculpture Championships.

Today, Saturday, Jan. 31 marks the final day of construction for the teams as many of them rushed to put the final finishing touches on their masterpieces. As we walked down the rows of these truly impressive works of art, snow was being cleared, and snow surfaces were being smoothed in anticipation for the nighttime lighting and exhibition of all the sculptures.

With teams from China, Argentina, and many other locations around the globe, as well as a handful of American teams, we caught up with Tom Day, a member of Team Breckenridge, to find out their story and some background on this year’s piece.

This is Tom’s 20th year competing in this competition and “it just gets better every year.” Says Tom. “This year we (team Breckenridge) are doing an ’02 carving, so what we have is Geppetto, who is carving a snowflake and we have Pinocchio along the side who is half done.” Tom says this is to infer that Geppetto is choosing snow over Pinocchio. “It’s really just a fun piece and Geppetto is actually 14 feet tall when he’s sitting down, so he’s really just huge. It’s really just a beautiful piece and we are really excited about it.” Like many snow sculptors, this is not a full time gig for Tom, so when he is not working in the snow, Tom spends his time working in the local real estate market.

As well as the impressive, yet delicate handful of sculptures, there is also an interactive kids fire truck sculpture for kids to play on that is equipped with a slide and a tunnel. The sculptures will be on nighttime light display from tonight through Feb. 8 in the parking lot for the Riverwalk Center in downtown Breck.