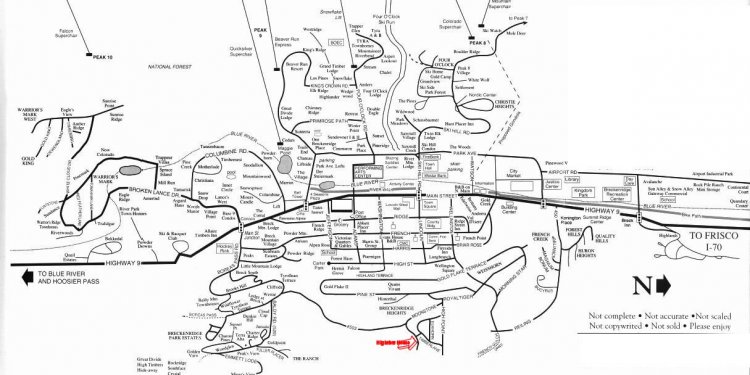 Breckenridge is a unique Victorian ski town originally settled in 1859 during the Pikes Peak Gold Rush. In the early 1860's the area supported over 8, 000 prospectors and the Gold Pan Saloon (103 N. Main Street) was open for business. By the early 1870's gold panning declined along with the town population (51 people) when hydraulic mining created another gold boom and surge in population.

In 1961, Breckenridge transformed itself into a ski town that is not only fun, but also offers surprisingly affordable lodging. With a charming historic downtown (350 historic sites) full of nightlife and an amazing ski mountain, Breckenridge is easily one of Colorado’s favorite ski vacation resorts.

Breckenridge is located approximately 120 miles west of the Denver airport (DEN), Breckenridge offers 2, 908 acres of amazing ski terrain, with roughly 300 inches of snowfall per year. Thirty Four lifts service Breckenridge, which is renowned as an advanced skier's mountain, although it functions equally well as an intermediate's paradise. The terrain and chairlift access around the mountain (five peaks) makes it a perfect fit for the whole family.

The Breckenridge lift ticket is also valid at Arapahoe Basin and Keystone (including night skiing). A multi-day Breckenridge/Keystone ticket (3-5 days) is packaged to include 1-2 days at Vail and Beaver Creek.

The Town of Breckenridge

Breckenridge was originally a mining community, which swelled into a booming town after the discovery of gold in 1859. Once the quest for gold faded, however, its residents moved on in search of new ventures and the population dipped to a mere 400. It wasn’t until 1961, when Breckenridge became a popular vacation destination for thousands of skiers each year that the town grew and prospered. A true vestige of the past still remains within one special building: the Gold Pan Saloon at 103 North Main, established during the 1859 gold rush, this is one of Breckenridge’s original businesses and the oldest continuously-operating bar West of the Mississippi. Today, the now-historic buildings are home to fabulous restaurants, boutiques and other après ski hang-out spots. With more than 30 bars, pubs, and restaurants on Main Street, Breckenridge has something for everyone from a casual atmosphere to dance clubs.

Breckenridge also host events year-round such as The Budweiser International Snow Sculpture Championships, Uller Fest, concert series and more. Make sure to check out what events are going on when you are in Breckenridge.

The popular town of Breckenridge is located at the base of the ski resort with a complimentary shuttle to get you anywhere you need to go. Lodging in Breckenridge provides easy access to the lifts on Peak 6-10. Breckenridge features hotel and condo accommodations that range from economical to luxury mountain-view properties and even a cabin or two out in the woods. Lodging is either ski in-ski out, short shuttle, or slopeside that create a perfect package for families and groups. Breckenridge lodging has the largest amount of private hot tub of any Colorado ski resort! Additionally, lodging in Breckenridge is very convenient to both Main Street and South Park Avenue. Here you will find the majority of restaurants, ski shops, shopping opportunities, and nightlife. See our lodging map tab to the right, which details the location of each property in Breckenridge in relation to the lifts and Main Street.

A brief introduction to skiing and snowboarding at Breckenridge, Colorado

This map details the location of popular Breckenridge lodging options. Accommodations are numbered on the map, which when clicked will display a brief description of the property. The list of these lodges on the right side-bar will also display the property, it's rating, and re-size the map centering on that property. You may also click on "more information" which will take you to a page devoted to that specific property choice and ski package options. Here you will find the property amenities, lodging photos, a map of the property, and chairlift location. You may also display nearby restaurants, bars, and grocery stores by clicking the sidebar to the right of the Breckenridge map.

All lodging options are color coded- Blue, Green, Purple, and in some cases Red. Blue indicates a ski-in property. Please note that some of these are ski-in/ski-out, but can also be walk-out or shuttle-out. Green markers suggest the lodging is within walking distance of a Breckenridge chairlift. Purple tabs are typically a short shuttle ride from lift access. Lastly, Red indicates that a car is recommended.

The lodging classification of ski-in/ski-out or within walking distance varies amongst users, terrain and snow conditions. It is best to either zoom in on the lodging map to make your own determination or call our reservation office for more details regarding the ski access.