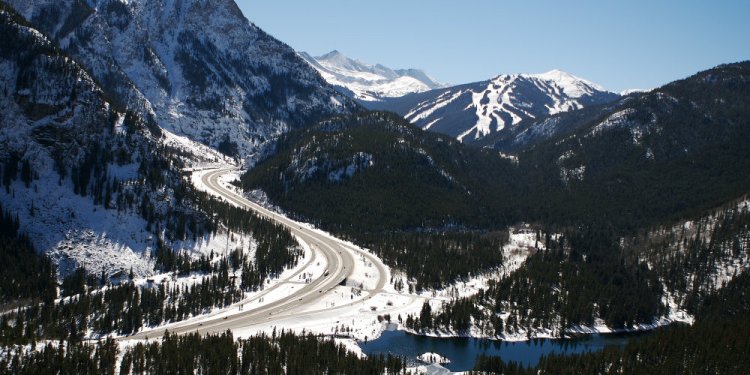 One of the very few downsides of skiing and boarding in Colorado is that it’s so good, everyone wants to do it. At times, particularly peak times in the morning and afternoon, that means a crowded and slow I-70 from Denver or elsewhere on the front range to the mountains.

One of the best things skiers and boarders can do to avoid traffic is to not drive at peak times. Basically, if you’re arriving right when the lifts open, or leaving when the lifts close, those are peak times. One one way to avoid that, is do the “meal plan.” Plan to arrive in time to eat a long breakfast before the lifts even open, head back to the front range after lunch, or have dinner on or near the mountain and head home after that. The goal is to be eating while everyone else is driving!

Another extremely effective tip is checking on the traffic before you hit the road. One of the best resources for Colorado skiers and boarders is CoTrip.org. This website has updated traffic info on I-70 going both directions. The simple site design lists segments of the road with green, yellow and red status, and automatically shows the simple mobile site if you pull it up on your smart phone. I always check the site before leaving the mountain, and have even found surprisingly low traffic at times I thought were going to be heavy. I have cotrip.org added to the home screen on my iPhone so it acts like an app. It’s great!

But what is the most obvious way to avoid I-70 traffic? Stay off I-70! Breckenridge has an ace in the hole with an alternate route that’s both scenic and traffic-free. If you’re looking to drive from Breckenridge to Denver and the traffic looks bad on I-70, just head through downtown Breckenridge and take CO-9 S out of town. You’ll head over scenic Hoosier pass and into Fairplay, where you’ll connect with US 285 N which will take you back to Denver. For the detailed Google Maps directions, click here.

This route is a little longer than taking I-70, but the fact that you’re moving the whole time, taking in the view and not hitting any traffic at all makes it totally worth it. It’s literally taking the scenic route. The “Fairplay Route” as it’s sometimes called, is listed as 108 miles from Breckenridge to Denver, while I-70 route is 81 miles. Is it worth a 27 mile detour? Absolutely!