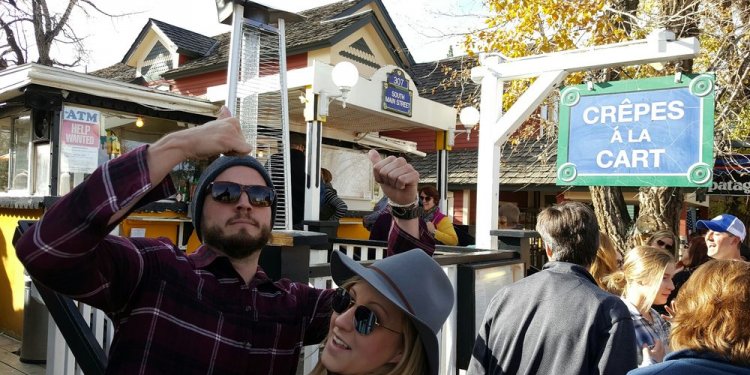 The smell of crispy, buttery crepes wafts across Main Street while a line quickly forms for the sweet and savory treat. The canary yellow cart is iconic, having been a fixture in downtown Breckenridge for more than 30 years.

"I've been doing this for 25 years, " said owner Alex LaMarca, standing outside in the afternoon sun with his dachshund, who keeps an eager eye out for the leftovers.

When LaMarca talks about crepe making, it's almost like a science. After lots of experimentation, he knows the exact batter, temperature and distribution of ingredients for the result he wants.

"I'm a bit of a perfectionist. It's easy for me to perfect making a crepe, " he said.

LaMarca estimated the cart has been around since 1980, first worked by a pair of sisters who also sold crepes. Since then, the cart has seen everything from soups to snowboards, before it ended up in LaMarca's hands in 2000.

He first moved to Colorado to pursue environmental studies at the University of Colorado, but like many other Summit County locals, moved up to the mountains after taking a job at Vail Resorts.

"It was about 1999, and I realized the town was about to blow up, " LaMarca recalled.

His parents also had a history as entrepreneurs; they owned an Italian leather shoe business in New York City. His mother, Arlene, designed them.

After his father passed away, she sold the shop, and visited Breckenridge, where she too noticed the bright yellow cart on Main Street.

With some trial and error, they narrowed it down to just the crepes.

"It didn't take long to drop of the other stuff, " he added.

Crepes a la Cart first opened with a total of three or four employees.

"For the first six or seven years, I worked here 12 hours a day, " LaMarca said. "It took a while for people to get to know who we are. Now, we employ 25 people, and are looking to expand."

On the busiest days, LaMarca said the cart will serve upwards of 900 crepes, with a line stretching around the block.

When LaMarca first started the business, he had never made a crepe before.

"I had definitely had them before, " he laughed. "My mom taught me how to cook. She was a very accomplished cook herself."

Arlene came up with the batter recipe, and they started selling sweet and savory crepes, with a plethora of fillings. Everyone working at the cart learned to call her "mom."

"Working with chefs and the people we hired, we've come to refine our recipes, " LaMarca said. "We've tested everything for months, if not years."

Now, they've boiled the business down to one batter and a list of the most popular items. The top sellers, LaMarca said, are the Monte Cristo and "anything with Nutella."