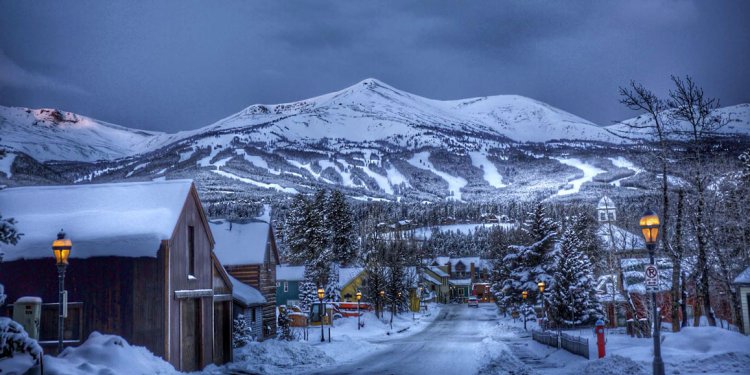 Located at 9, 603 feet above sea level on the western slope of the Continental Divide in the heart of the Rocky Mountains lies the charming Victorian-style town of Breckenridge. Although it feels remote, one of the town’s calling cards is its accessibility, being only 90 miles from Denver.

Established in 1859 during the height of the mid-nineteenth-century Gold Rush, Breckenridge survived the heydays of gold prospecting and boomed once again in 1879 when other silver and lead carbonates were found. The town was incorporated in 1880. Since then, the town of Breckenridge has gone on to become the recreation centerpiece of Summit County.

Celebrating its 150th anniversary in 2009, Breckenridge has a little something for everyone. Within its 5.3 square miles, one can spend their day taking in a class in the Arts District, attending a yoga class at the Recreation Center, going cross-country skiing at the Gold Run Nordic Center, enjoying a live concert at the Riverwalk Center, catching a game of hockey at the Stephen C. West Ice Arena, seeing a play performed by the Backstage Theatre Company, or the obvious … spending the day on the mountain.

If the nightlife scene is your cup of “tea”, the town of Breckenridge boasts 76 restaurants and bars for your enjoyment. Is shopping your true calling? Well, Breckenridge has over 200 shops and boutiques as well as a number of grocery and liquor stores. Would you like something a little more cultural? Breckenridge has you covered with 249 historic district structures and 18 museum/art galleries. The Breckenridge Historical Society even offers visitors a glimpse of life in Breckenridge during the late 1800’s and early 1900’s with its historic walking tours of the city.

If you prefer the active lifestyle, now the town’s biggest draw, Breckenridge Ski Resort was founded in 1961 by the Wichita, Kansas Lumber Company, and a new boom era began. Boasting 2, 908 acres and over 300 yearly inches of “white gold” for all levels of skiers and boarders, including 25 acres of heart-thumping terrain parks and 1, 061 acres of wide-open bowls, Breckenridge is one of the most visited resorts in North America.

The mountain resort consists of five peaks nestled among a host of Colorado’s famous “fourteeners” – aptly named Peaks 6, 7, 8, 9 and 10 – including the country’s highest chairlift, The Imperial Express, coming in at 12, 987 feet. Feeling hungry? You don’t necessarily have to grab a bite to eat on the hill as the gondola will take you from Peak 8 to Peak 7 to town in the matter of minutes, making it simple to enjoy a hot lunch in town or do a little shopping before hitting the slopes again in the afternoon.

If skiing and snowboarding isn’t the thing for you, other winter activities in Breckenridge include snowshoeing, ice skating, sleigh rides and snowmobiling.

No longer just a winter resort, though, Breckenridge is a now a year-round destination. Breckenridge boasts over 300 days of sunshine each year, resulting in a multitude of Colorado’s famous “blue bird” days for your outdoor recreational enjoyment. During the summer, the average daytime temperature is a balmy 70 degrees. Hiking, mountain biking, camping, fly fishing, rafting, kayaking, horseback riding and golfing, paintball, are just a few of the activities to choose from. Breckenridge’s family-friendly Summer Fun Park is another alternative for those looking to take it easy.

Cruise down 2, 500 feet of roller coaster track on the Gold Runner Coaster, choose from three different 2, 600 foot long tracks on the Alpine Superslide, take a 4x4 tour in open-air safari-style jeeps, check out the mountain on an off-road Segway Tour or just watch the kids expel their abundance of energy in Ripperoo’s Bounce House, on the Superbungee Trampoline and scaling the Rockpile Climbing Wall.

For the 3, 400 permanent residents, present-day Breckenridge offers an incomparable quality of life with an excellent school system, community programs, health care facilities and ample shopping opportunities. Festive events bring over 3 million visitors per year from all over the world to experience a taste of what this amazing town has to offer. An all-season recreation and vacation destination, Breckenridge offers numerous other summer and winter events including: